Known for it’s valuable products at an affordable price range HP has announced the release of it’s two new devices in the full fledged hybrid tablet segment named, “HP SlateBook X2 and HP Split X2” in the Indian market. This is the segment ie. hybrid tablet segment is lately gaining a significant amount of momentum. 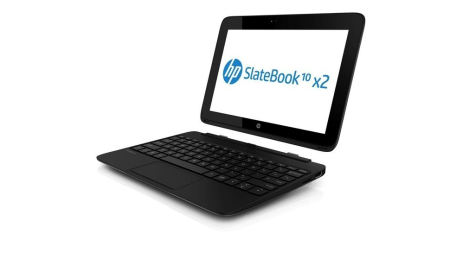 HP SlateBook X2 will be the company’s first NVIDIA Tegra 4 powered full fledged tablet offered with a detachable keyboard dock. Also would be first Android powered laptop (hybrid tablet) .It is just an another hybrid tablet which will be introduced by the company in the upcoming months. In terms of it’s technical specifications, HP SlateBook sports 10.1 of IPS LCD display with Full HD WUXGA 1920×1200 pixels resolution. However, this HP SlateBook X2 can be used as an alternative of 10.1 inch HP Notebooks. Though, the price could be on higher side than a notebook but it has a major advantage of hybrid technology. This hybrid technology enable the user to use it free as a tablet or as well as a full fledged notebook.

In terms of Storage specifications, it will be equipped with 64 GB of Internal storage. The memory can be easily expanded as this device houses a microSD card slot for storage expansion.

Second element in the line up, will be HP Split x2, which flaunts 13.3 inch of screen and powered with Intel Third Generation Core i series processor. Specifying it’s Imaging optics, this device is equipped with 2 MEGAPIXEL of HP TrueVision Full HD webcam.