Domestic manufacturer, Celkon mobiles has added a new entrant to upgrade it’s smartphone portfolio in the Indian market. This new element is a successor for company’s previously launched Celkon A107 smartphone dubbed as Celkon A107+ signature . It has been introduced with some enhanced and latest trending features. 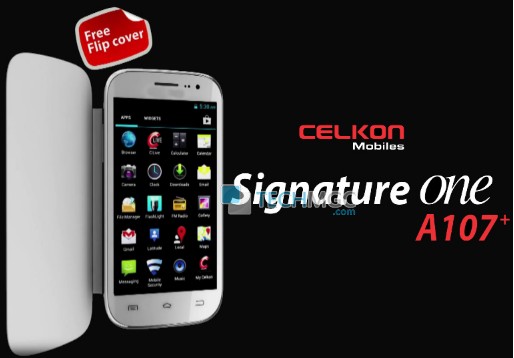 Celkon mobiles always seems to provide the devices with best features and specifications under a budget price range. Recently, company had introduced Celkon Campus A63 smartphone which has gained a lot of popularity in the entry level range of smartphones in India. And A107+ Signature is no exception, its a budget smartphone, moving towards the specifications and details of Celkon A107+ Signature smartphone, this device sports the same size of 5 inch, capacitive touch screen display with 480×800 of pixels resolution. As compare to Celkon A107 Signature , one of the most highlighted and upgraded feature of this smartphone is it’s operating system, new Celkon A107+ sails on Android 4.2 jelly bean operating system. This device is powered with dual core processor running at a clock speed of 1GHz which helps or allows the user to multitask with several programs at same time.

It supports Dual Sim(GSM+GSM) with dual standby technology, which provide the user a perfect balance between work & play with DUAL standby mode. In terms of storage specifications, this device comes with 512MB of RAM which is rather a now common site and considered basic, 4GB of internal memory which can be expanded up to 32GB via micro SD card slot. Connectivity wise, this device lacks 3G which can be a drawback of this device however, it supports 2G, WiFi, Bluetooth, FM radio and a 3.5 mm audio jack. Enumerating it’s specifications and features regarding the photography specifications, this device houses with both the primary and secondary snapper options. On the back side, it include a primary camera rated at 8 MEGAPIXEL with LED flash which allows the user to capture nice quality of snapshots even in the dim vision. Front side, it include 1.3 MEGAPIXEL of secondary camera for video calling/chatting.

To supply this device a proper need of supplement to remain charged up throughout the day, this device comes with 2100mAh of rechargeable battery which claims to deliver nice amount of talktime as well as standby time.

Celkon A107+ Signature One specifications:

Information regarding it’s pricing and availability remained under curtains but we can expect it with couple of hundred bucks more than Celkon Signature A107. Some of the pre-installed applications will include facebook, google play store, you tube and many more. To make the offer more value for money, company is offering a flip cover inside the packet for free.

One thought on “Celkon A107+ Signature One with Android 4.2 and 5 inch display launched”