High Tech Computer Corporation generally known as HTC , a reputed Taiwan based manufacturer of smartphones and tablets headquartered in New Taipei City has finally ended all rumors around the launch of its much debated device HTC One Mini. Company has finally unveiled HTC One Mini , the smaller sibling of HTC One packed with some nice features and specifications. 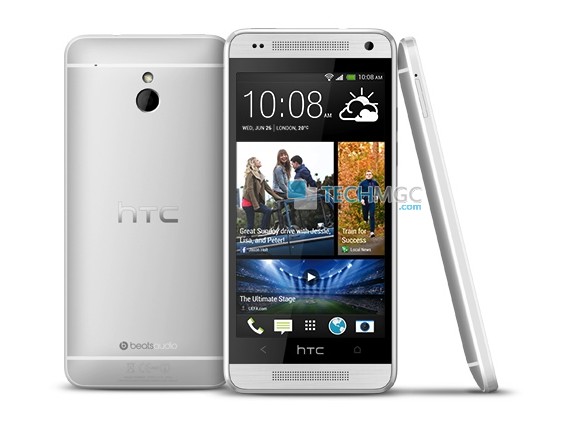 It is official that HTC One mini version will come with trimmed down specifications and cheaper than the HTC One . From the company officials, we got to know that this handset will hit the stores probably in the upcoming couple of month. Though, the launch is confirmed for overseas but information regarding its availability in India is still unspoken. Coming towards the specifications and technical details of HTC One Mini, starting off from it’s design and outer body style the HTC One Mini continues the same predominantly aluminum construction and virtually the same exact design language which we had witnessed earlier from it’s elder sibling, although there is visibly more polycarbonate around the edges. In terms of measurements and overall portability is concerned, the HTC Mini has 9.3mm of thickness which makes this device to get easily fitted inside your palms. To ensure the user hold it for a longer time without any pain it weighs 122 grams which makes this device easy to use anywhere, anytime.

Giving a glance towards its display, the HTC One Mini flaunts a decent 4.3 inch Super LCD display with a resolution of 720×1280 pixels which is just as beautiful and accurate as the 1080p panel on the HTC One . However, its pixel density is technically lower at 341ppi, but in practice it’s indistinguishable. To make this device free from scratches and unexpected dirt marks, its screen is covered with Corning Gorilla Glass 3 . Under the hood, this device will sails on Android 4.2.2 Jelly Bean operating system which is the latest version of the Android OS. Apart from Android it also comes with HTC Sense 5 User Interface icing on top. HTC One Mini is equipped with Qualcomm Snapdragon 400 chipset which include a dual core Krait 300 processor running at a clock speed of 1.4 Ghz. To ensure nice experience of graphics on this device it comes with Adreno 305 support.

From storage side, this device comes with 1GB of RAM which makes the overall performance more smoother and faster. Internal memory is 16GB but unfortunately it doesn’t comes with any expansion slot. So, your data and files will be restricted up to 16GB only. Enumerating its photography specifications, this device comes with both the primary and secondary snapper options. At the back of the HTC One mini resides the same 4MEGAPIXEL of UltraPixel camera which is same as we finds on HTC One . The camera support HTC’s ImageChip 2 and a BSI sensor of 1/3″ size which makes this camera capable of shooting 1080p videos with HDR and the LED flash. Other features like HTC’s Zoe is available as well, along with slow motion video recording with variable speed playback. The front-facing camera is 1.6MP and sports a BSI sensor that can shoot 720p videos. The HTC One mini also features the same BoomSound speakers, though they’re smaller compared to the ones featured in the HTC One.

‘The HTC One Mini is an opportunity for HTC to bring their smartphones to a different set of customers – it’s the smartphone made for those that want the best bits of the HTC One, but in a smaller more compact package. We are sure that this mini version of the supercharged HTC One, which has won critical acclaim for its incredible performance and design, will definitely impress our customers’, company official was quoted saying.

Connectivity wise, it is covered with LTE, Bluetooth 4.0 with aptX enabled, Wi-FI a/b/g/n with DLNA and GPS + GLONASS. HTC has provided a range of sensors, too – there’s a gyro, accelerometer, proximity and ambient light sensors. To make your device work throughout the day, it comes with non removable battery of 1800 mAh capacity with talktime of up to 13 hours on 3G and over 18 hours on 2G.

Brief summary of HTC One Mini

However, company didn’t mention any information regarding its pricing and availability but we assume it somewhere €449. Price and launch date for Indian subcontinent is still not disclosed by company.