A fully owned subsidiary owned by the Finish mobile-phone manufacturer Nokia Corporation named as, ” Vertu Mobiles” who is a British manufacturer and retailer of luxury mobile phones has launched it’s premium smartphone named, “Vertu TI” in the Indian market at an unmatchable price of Rs 6,49,900. 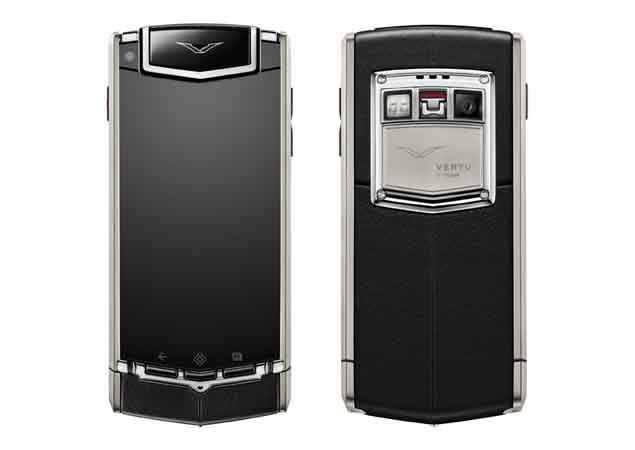 In the arena where all the other manufacturers are struggling to launch a mixture of low cost coupled with high technology Smartphones it’s look like with the entry of this new Smartphone by Vertu it will surely shake up their mind. Vertu TI however launched earlier in the other part of the globe worldwide but this is the first time it has landed up in India. Getting a glance toward it’s specifications, in terms of frame up this device flaunt 3.7-inches the WVGA Sapphire crystal glass capacitive touchscreen display with 480 x 800 of pixels resolution and to make the display more brighter it supports 16M colors. However, according to Vertu these smartphones have 184 individual parts, which are made by company’s craftsmen in England; the body is made by Grade 5 titanium, and has a set of Bang & Olufsen stereo speakers. Furthermore, it claims that the sapphire crystal of the smartphone renders the screen virtually scratch-proof and it is tested to be four times stronger than other smart phones in terms of impact resistance.

In terms of Platform dependency, this device runs on Android 4.0 Ice Cream Sandwich Operating System powered with a Dual Core processor at a clock speed of 1.7 GHz. The company has also added its own custom User Interface. Briefing it’s Storage specifications, Vertu TI is equipped with 1GB of RAM, 64 GB Internal storage which can be easily expanded up to 32 GB.

Enumerating it’s Photography Specifications, Vertu TI is offered with both the primary and secondary camera. On it’s back, it supports a 8 MEGAPIXEL of primary camera with video recording up to 1080p@30fps. Some of the other feature include autofocus, Geo-tagging and LED flash technology which enable the user to click low vision images with a nice quality.

Commenting on the launch, Vertu President and CEO, Perry Oosting said, “VERTU TI is our most significant product for a decade. Android 4.0 delivers a proven and intuitive environment for users while the design and craftsmanship of the handset remains uniquely Vertu.”

“Vertu has pioneered and lead the luxury mobile phone sector since we began in the late 90s and the great depth of our knowledge and experience can be seen in VERTU TI. There is nothing else like it.”

One thought on “Vertu TI luxury Smartphone launched in India”