Another Dual Core Smartphone joined the arena of ever expanding segment of budget smartphones by Spice mobiles. Spice Mobiles encompass it’s smart series by introducing Spice MI-502 Smart Flo Place 2 in the Indian market. Spice Mi-502 packed up with nice features and specifications. To attract more buyers, the company has tagged it at an affordable price of Rs 6,499 only. 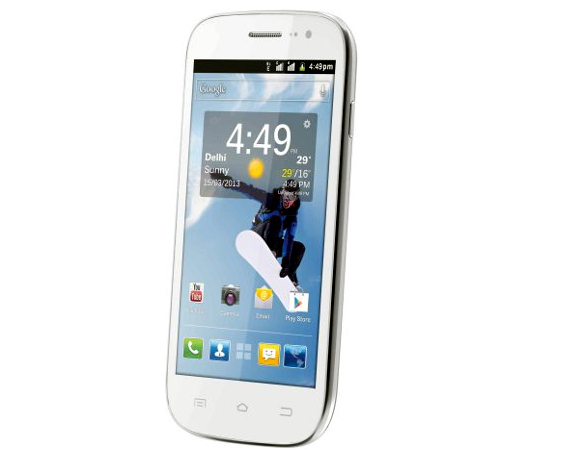 Spice taking the same strategy used by most of the competitor to offer nice features with a low price tag as Indian market bumps out a huge sale in mid range segment. Opening the box and specifying it’s details, Spice Mi-502 Smart Flo Pace 2 boast 5.0 inch of Capacitive Touch Screen display with 480 x 800 pixels resolutions, packed up with 5 inch of huge screen size which confused as what to call it.. a Smartphone or phablet, well thats upto you to decide though most will call it a phablet. It will be a good option for those who wish to use a big screen device at a cheaper price tag. Dealing with its Platform dependency, this device sails on Android 4.0 Ice Cream Sandwich Operating System powered with a Dual Core Processor clocked at 1 GHz. Incorporating the same feature in it’s most of the devices this devices, it also support Dual Sim with Dual Standby technology.

Briefing its Storage Specifications, Spice Mi-502 Smart Flo Pace 2 includes the usual storage options which we see in any mid range tagged Smartphone, it is well equipped with 512MB of RAM, 512MB of Internal memory which can be easily expandable up to 16 GB via micro SD card slot. Enumerating the device Connectivity supports, this device supports 2G, Wi-Fi 802.11b/g/n, Bluetooth, aGPS, FM Radio and a 3.5 mm Audio Jack, however it lacks 3G which could be the biggest drawback of this newly launched device.

In terms of Photography Specifications, on the back this device houses a primary camera rated at 5 MEGAPIXEL with Dual LED flash technology making it more easier for the user to click good quality images in low vision, a secondary camera rated at 1.3 MEGAPIXEL for video calling. To make the life going on for this handset, it is equipped 2100 mAh battery which would deliver nearly 8 hours of talk time and up to 100 hours of standby time approximately. Some of thepre-installed applications include Gmail, Latitude, Google Maps, Google Search, Google Places, Google Talk, YouTube, Google Play Store.

Although, it is packed up with nice specifications and features and a descent price tag but without 3G it would be not easier for this device to compete with other devices which houses 3G.