Technology is moving at very fast and steady pace but in the gadget industry , tablets and smartphone’s recent advancements have outshined many other segments. Once, one of the selling gadget we known as Television is not far behind and recent advancement like 4K resolution being seen as another big thing. And after LG, Sony now its Samsung who have launched their 4K Smart Premium Television. 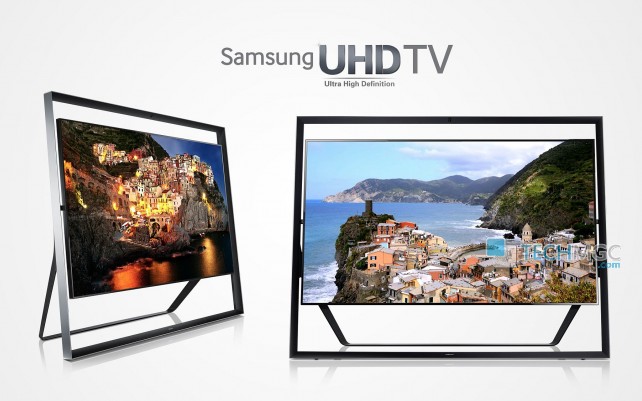 Samsung has launched its first Ultra High Definition (UHD) 4K television equipped product called as Samsung UHD 85S9 in the Indian market with a hefty price tag of Rs 27,00,000 which is quite unimaginable. The price is so high that you may have to make bizarre decision like whether to buy a Audi A4 sedan or to buy Samsung UHD 85S9 .

The new generation TVs are called smart TVs which are capable of giving you a new experience that earlier televisions could not deliver. It offers almost all the thing which lure the user to browse, Skype, surf, watch 3D videos, convert 2D to 3D and a lot more than that. Coming towards specifications and details of this device, in terms of display this device flaunts a huge 85 inch of display with a native resolution of 3840×2160 pixels resolutions, which is almost four times that of a full-HD television. The 4K TV supports 4 times the 1080 pixels resolution. Now, you can easily imagine the clarity.

One of the most starring feature about the Samsung 85S9 is that it supports the Samsung’s Smart Evolution Kit. It means that the user can easily swap put the motherboard with a new and advanced one hence keeping the user as well as the TV updated. Samsung 85S9 television includes Samsung’s proprietary up-scaling engine to up-convert HD or full-HD content to UHD-level picture quality. In addition to the up-scaling engine, Samsung says it’s also working to remove conflicts related to UHD content industry standards. This device is powered by a quad core processor.

Announcing the launch of the Samsung UHD TV 85S9, Atul Jain, Sr Vice President, Samsung India said, “The Timeless Gallery Design of the Samsung UHD TV meets the need of premium customers for Innovative design coupled with Best in Class performance. The UHD TV offers a resolution that is four-times better than that of full HD TVs, and UHD screens offer enhanced clarity with rich colours.”

Another amazing features of Samsung UHD 85S9 is it include Wi-Fi which is a connecting option which will connect your smart TV to the internet. Among other features are a camera, gesture control and voice control. You also have the option to use your smartphone as a remote controller for this TV. The other connectivity options are 4 HDMI ports and 3 USB ports which allows to connect your pen-drive and some more screens with this TV.

This device come with the company’s one connect solution which enables you to eliminate cable clutter by requiring only one cable to connect to the TV. It is also packed with 120-watt array speakers built into the frame of the television to offer an enhanced audio experience.

Though, LG has already announced a curved OLED TV modeled as LG 55EA9800. It looks like more manufacturer are going to join this elite club in future.

What you all guys think which is a better option to buy Samsung 4K UHD TV or buy an Audi A4 or BMW. Share your view with us.