One of the leading American cellular operator, Sprint has unveiled two add two new element to upgrade it’s smartphone portfolio. It looks like the Windows 8 has been extending their reach towards the leading smartphone maker in the gadget industry familiar to us as Samsung and HTC . Sprint made this official announcement ahead of Microsoft annual Build conference. 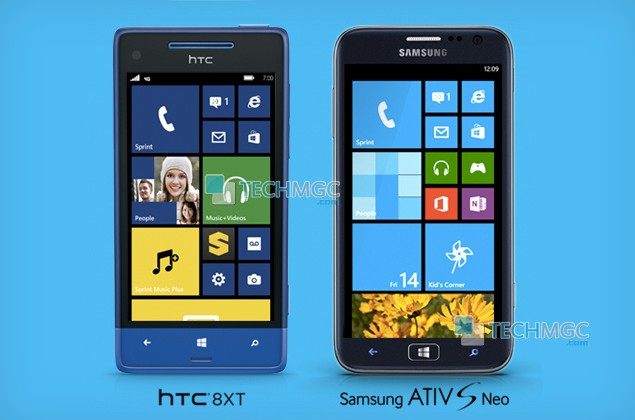 These two new Windows 8 running smartphones are named as Samsung Ativ Neo and HTC 8XT . In recent days, Samsung has been making its way to the headlines quite often and looking at its mobile phone portfolio, it can be genuinely considered as one of the best manufacturers and it looks like HTC is now considering the same path and gained quite a bit of steam in the gadget industry with its recent launches.

Coming towards the first one in the line up ie. HTC 8XT which is a re-invented version of the original HTC 8X. Though company didn’t unveiled all it’s technical details and specifications but we manages to capture some basic details. In terms of frame up, this device is sports the same 4.3 inch of decent capacitive touch screen display with 720 x 1280 of pixels resolution. This device measures the same 132.4 x 66.2 x 10.1 mm in overall dimensions and weighs 130 gms. Dealing with it’s platform dependency, this device sails on Windows Phone 8 operating system powered with a snapdragon 400 dual core processor at a clock speed of 1.4GHz. Enumerating it’s storage specifications, this device is equipped with 1GB of RAM which makes the overall web surf quite easier, smoother and faster. Except RAM support, this device also support 4GB of Internal memory which can be easily expanded up to 64GB via micro SD card slot.

“We know our customers are anxious to get their hands on these Windows Phone 8 smartphones, HTC 8XT and ATIV S Neo,” said Fared Adib, senior vice president-Product Development, Sprint. “Without a doubt, they will rival any smartphone on the market today. Our customers will appreciate being able to use them all day, every day without worrying about overages or data caps.”

Connectivity wise it is enriched with almost all the usual connectivity options, it supports WiFi, Bluetooth, 3G, 2G, 4G, GPS and also comes with 3.5 mm Audio jack. Briefing it’s Photography specifications, this device comes with a both the primary camera and secondary camera options. On it’s back side, it comes with 8 MEGAPIXEL of primary camera with auto focus and led flash technology. On it’s front side, it has been installed with a secondary camera rated at 1.6 MEGAPIXEL for video chatting. It is an ideal device for photo clicking as main camera takes great photos in bright-light and low-light situations, and the ability to shoot video and take still pictures simultaneously.

“We are excited to be bringing the most personal smartphone experience to Sprint customers this summer,” said Terry Myerson, corporate vice president, Microsoft Windows Phone Division. “With compelling hardware from HTC and Samsung, coupled with unlimited 4G LTE from Sprint, these Windows Phones will offer the complete package.”

Second in the line up, Samsung Ativ Neo it will sport some interesting features including ATIV Beam . This Samsung exclusive application will let users ‘beam’ across photos, music and videos to other Windows Phone 8 and select Android devices.

Coming towards the specifications of Samsung Ativ Neo it will flaunt slightly bigger 4.8 inch HD display. In terms of Platform dependency, it will also sails on Windows Phone 8 operating system powered with a dual core processor at a clock speed of 1.4Ghz. To make this device free from downloading lots of files and a house for keeping lots of information, this device is equipped with 1GB of RAM which can be expanded up to a limited extent via micro SD card slot.

From the camera point of view, it comes with 8 megapixel camera at the back while a front facing 1.9MP camera can be seen above the screen. The camera app includes several preloaded lenses like the Beauty Shot mode for smoother looking skin in head shots, Manga Camera to give pictures a fun twist by turning friends and family into cartoons, and built-in Photo Editor that allows the user to edit, color, effect, decorate or share their pictures quickly and easily. The battery on the other hand is a bit disappointing at just 2,000 mAh.

From the sources we came to know, Windows Phone 8 won the PC Magazine Readers’ Choice Award for best mobile operating system in March 2013. The only phone with Live Tiles, Windows Phone 8 offers a truly personal smartphone experience designed to keep customers connected to the people. And if it continues to run like this it will surely give a tough fight against the other leading competitors in the smartphone industry.

For more information on technology, keep updated with us.