Japanese conglomerate, Sony mobiles has roll out a new device under it’s most prodigious range of smartphone series familiar to us and worldwide as Sony’s Xperia series . This new element is called as Sony Xperia C as Xperia C S39h and it will be rolled out for sale in China only. Information regarding it’s launching and availability in India and other parts of the country is still a mystery. 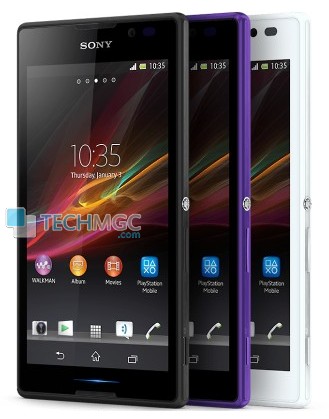 Company has made the announcement of this handset for China only and as per the rumors it will be rolled out for sell in China in the Q3′ of 2013. It appears Sony is very busy in launching new handset, they had just launched Sony’s latest addition in the premium range of smartphones as named as which is the extended version of Sony Xperia Z.

Coming towards it’s specifications, Sony Xperia C sports with a huge 5.0 inches of Capacitive touchscreen display with 540 x 960 of pixels resolution. This huge pixel resolution will blender the display with ~220 ppi of pixel density. Dealing with it’s platform dependency, it sails on the same operating system which all it’s predecessor and successor smartphone operates ie. Google Android operating system version 4.2.2 Jelly Bean, this is the latest version of android offered by Google till date. Sony Xperia C is powered by a quad core processor running at a clock speed of 1.2 GHz. This device also supports Dual Sim (2G+3G) technology which allows the user to easily swap calls from one sim to the other.

In terms of Storage specifications, this device is equipped with a decent storage support. It includes 1GB of RAM which makes the overall performance more smoother and faster. Incorporating 1GB of RAM will be an added advantage for this device and it comes 4GB of Internal memory which can be easily expanded up to 32GB via micro SD card slot. Briefing it’s photography specifications, this device includes only primary camera options and somehow sony left out the secondary camera options. On it’s back side, it includes a primary camera rated at 5 MEGAPIXEL. Some of the other features of camera includes auto focus, Geo-tagging and LED flash technology which enable the user to capture nice snapshots even in the dim vision.

Connectivity wise, it supports WiFi, 3G, GPS, 2G, Bluetooth and many more. To power it up, this device is equipped with 2390 mAh of battery which delivers 588 hours of standby time and 844 mins of talk time. There is no such official announcement made by the company regarding it’s availability and pricing yet.

Let’s see when Sony will officially announce the availability of this handset in India and at what price tag.