SAMSUNG, one of the world’s leading giant of gadget and mobile world has unveiled it’s plan to launch New range of its mobile phone as Galaxy Grand very soon in the Indian market. Now, Samsung has planned to add another couple of big screen phones in the line-up in it’s prodigious Smartphone segment. 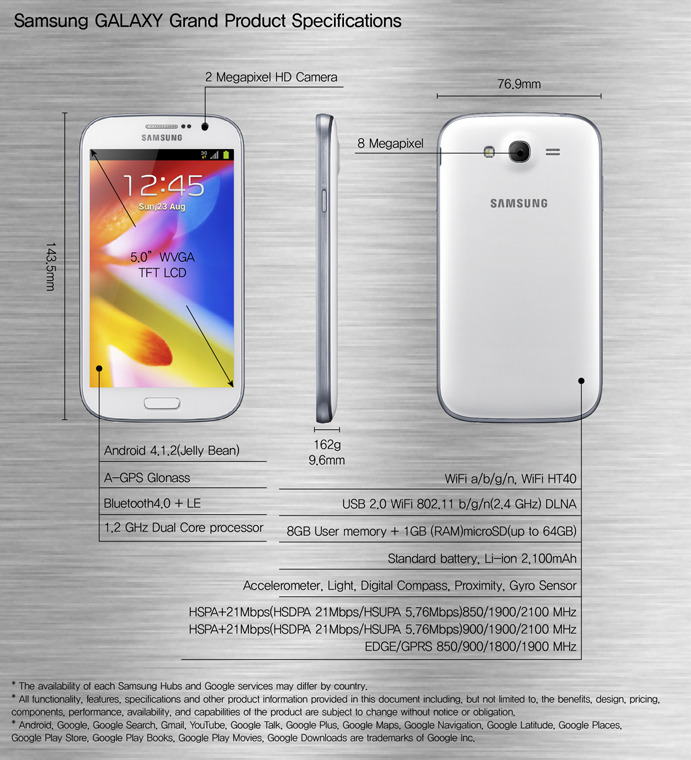 From the Sources, we came to know that this Galaxy Grand will be featured with a huge 5 inch capacitive touchscreen display, screen resolution around 800×480 pixels and will bloom up the display with 16M colors (186ppi). This Device is expected to be made available in two variants mainly the single SIM Galaxy Grand and dual SIM Galaxy Grand Duos, apart from that this handset seems to weigh around 162 grams with 9.6mm of thickness. Highlighting towards it’s software specifications, Samsung Galaxy Grand will run on Android 4.1 – Jelly Bean Operating System and it is also expected that like all Samsung handsets this one too will use the TouchWiz user interface, apart from that it will be powered with a dual core processor clocked at 1.2GHz processor and 1GB of RAM. Breezing towards it’s image optics, Galaxy Grand is expected to be equipped with 8MEGAPIXEL AF rear camera with LED flash helping the user to capture images in the dark vision, apart from the rear one, there will be 2MEGAPIXEL of front camera that claims to deliver 1080p (Full HD) video recording supported @ 30fps. Fabrications about it’s storage, it will come with 8GB of internal storage which can be expandable up to 64 GB with microSD support.

Samsung GALAXY Grand also includes intuitive features that make the phone easy to use. For example, Direct Call enables users to automatically dial a call by raising the device up to the ear; while users can also shake the phone to trigger status updates, or pan it to zoom into a screen. Smart Alert shows missed events such as missed calls and new messages just by picking up the phone. Popup Video, for example, lets users watch video in a pop-up window anywhere on the screen while running other tasks; S Voice lets you control the phone using your voice; and AllShare Play lets you share content across Samsung devices using a single account.

In terms of its Connectivity features, the Galaxy Grand supports 3G, 2G, Wi-Fi, Bluetooth 4.0, S Voice and microUSB. The battery is expected to come with 2100 mAh capacity that should give a decent usage time on a full charge. Samsung has made it clear that on the dual SIM version users will be able to receive calls on other SIM when a SIM is being used. The pricing details and the availability dates are not disclosed. Probably Samsung will try to keep the handset price well within the Rs. 20,000 range.

The announcement of this smartphone shows plan of Samsung to take over the launches of new budget 5″ inch smartphone from various brand like Zync, Index, Karbonn, Micromax etc.