Celkon has silently launched their new A62 budget dual core processor powered tablet. The phone is available on snapdeal to order online however, on official website of Celkon, it is still listed as coming soon. 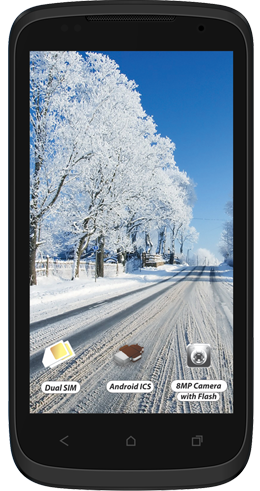 Since phablet market is already so much saturated, now manufacturers are coming with some new combinations of features which may not look good at first glance but who knows what may work for you, this new offering from Celkon ie. Celkon A62 is no difference. The phone is large enough ie. comes with 4.7 inches of TFT screen with 854x480px of resolution and has been powered with 1Ghz dual core processor. However, company has stripped few of the other option in order to keep price down since its a budget phone but with dual core processor.

As usual you see with most of the latest phones, this phone has also inbuilt support for dual sim. The phone has a 8 megapixel primary camera and has 2.0 MP front camera and it comes with flash support. The phone is capable of HD video recording and has auto focus and multishot features also available. The phone runs on Android 4.0 (ICS) operating system.

In terms of connectivity, this phone has support for Bluetooth with A2DP, has inbuilt WiFi but the sad part is that this phone doesn’t support 3G, may be to cut down prices. It only support 2G at 900/1800 Mhz. For internet , you have choices of GPRS and EDGE only (apart of Wifi). Now with stripping out 3G support in a dual core phone, it doesn’t make lots of sense but as said, this is a dual core phone with big screen, may those who are looking for big screen with decent processor power may find it suitable.

However, details of its Graphic processing unit ie GPU is not available, so can’t comment much about its gaming capability but hopefully it comes with some decent GPU as dual core power will go mostly unused for graphic intensive applications and games.

In the area of storage, device has 512 MB of ROM and supports MicroSD card upto 32GB. Other feature it include is FM radio support with the use of headphone used as antenna. The phone has dimension of 138x79x10.4 mm and it weighs 109g approximately.

Last but not least, the device is powered by Li-Ion 1800mAH battery which looks tiny enough for such powerful unit, though its talktime and standby time is not available yet.

The list price of this device is RS. 6799/- which looks decent enough for large screen dual core phablet, if it was with 3G then would have been a very good choice. For more news and updates , you may subscribe our feed, FB page or follow us on twitter.