Josh mobiles, an India based mobile handset manufacturing company which was not active in smartphone segment though is present in market from good time has finally stepped up in the gadget industry of India. Company has come up with a new element to compete against the other leading mobile handset manufacturers in the country. This new device is named as Josh Fortune HD and with this new entrant, company is strongly aiming to achieve reputable player of gadget industry in India. 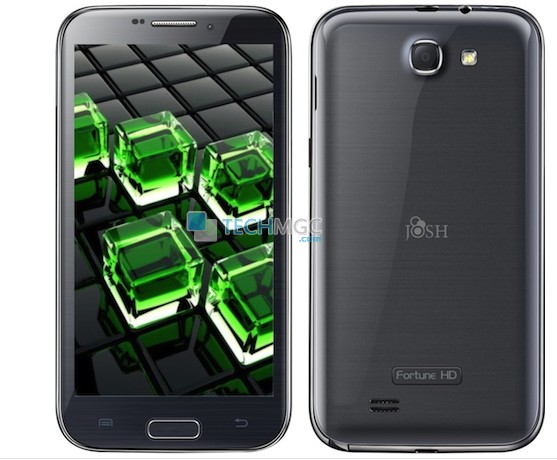 The price of Josh Fortune HD is set at Rs 11,999, which eventually make it comparable against the other selling devices in the same price tag. Some of the already launched devices within the same price range include Micromax Canvas II, Samsung Galaxy S Duos and many more. Coming back to this device, Josh Fortune HD sports a huge 5.3 inch of Capacitive Touchscreen display with 540×960 of pixels resolution. This huge resolution of this device will cater the display with ~207.82 PPI of pixel density. Apart from the technology embedded in the smartphones, display plays a vital role as compare to the other features of the smartphones. And since, large screen size in smartphone is still one of the most appreciated feature by a majority of smartphone buyers, company used this policy very cunningly and incorporated a large size of display in their very first smartphone.

Dealing with the Platform dependency, this device sails on Android 4.0 Ice cream sandwich operating system powered with a dual core processor at a clock speed of 1.2 GHz. It is quite unusual to see company has introduced this device with such an outdated version on android, where on the other hand in the low cost range of smartphone other manufacturers are offering their devices with latest Android Jelly Beans bean operating system. On the hardware front, Josh Fortune HD is equipped with 1GB of RAM which ensure the smoother performance, 2GB of internal memory which is quite low as compared to the other devices but to fulfill this shortcoming, the device is slotted with a memory expansion card type i.e micro SD card slot through which user can expand up to his need limited up to 32GB.

In terms of s napper options, this device is packed with both the primary and secondary snapper options. On it’s back it include a primary camera rated at 8 MEGAPIXEL and on its front it houses a secondary camera rated at 3 MEGAPIXEL for video chatting. Briefing it’s Connectivity specifications, Josh Fortune HD supports 2G, 3G, WiFi, GPRS, EDGE, Bluetooth, g-sensor, proximity seonsor and a 3.5mm Audio jack. This device supports Dual Sim with Dual Standby technology, in which one slot support 3G and the other one for 2G.

Commenting on the launch of its latest, Fortune HD, Deepak Gupta, Director, Josh Mobiles said, “Fortune HD is packed with exciting features and its high definition screen shall take you to the next level of viewing experience. The latest addition in the Fortune series on our 3rd anniversary strengths us further in the smartphone category”

The device measures 150 x 79 x 9.8 mm in terms of overall dimensions. In terms of power capacity, on a single charge this device draws power from a 2,400 mAh of battery which provides 4.5 hours of talk time and 2 hours of standby time. Some of the per-installed applications include Google Play Store, HTML browser, social networking applications and many more.

Josh Mobiles has its distribution networks in over 175 locations across India lets see how market responds. Do share your views how think Josh Fortune HD can compete against the other leading brand such as Micromax, Lava, Xolo.