Taiwanese manufacturer, “Asus” has officially launched it’s much awaited entrant named, “Asus Fonepad” in the Indian market. Company has already unveiled the this Fonepad at MWC 2013 and since it has created a buzz in the gadget hub worldwide. 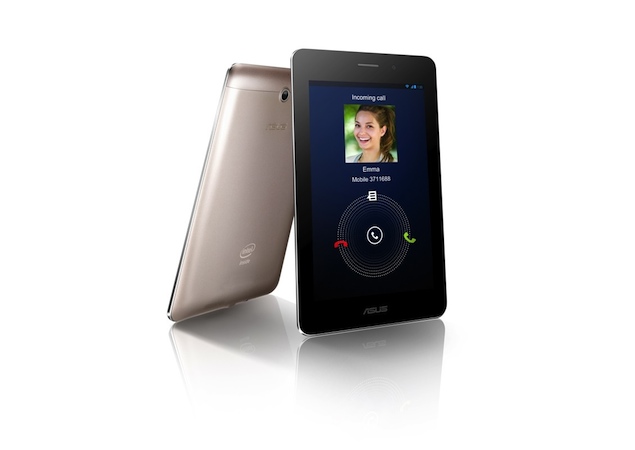 Recently just a couple of months ago company launched it’s PadFone 2 which gained a lot of popularity among the tech geek worldwide and now with this new element companyaims to increase the list of it’s fan following in the gadgets arena. Eying on towards it’s Specifications, Asus Fonepad flaunts 7-inch IPS LCD capacitive touchscreen display with 1280×800 of pixels resolution. Dealing with it’s Platform dependency, this device runs on Android v4.1 Jelly Bean Operating System powered with Intel Atom Z2420 processor clocked at 1.2 GHz which would definitely not only increase the processing speed of this device but at the same time it will surely fascinate some keen interest of the Android game lovers as this device is equipped with PowerVR GC540 graphics engine. Specifying it’s dimensions, Asus Fonepad weighs nearly 340 gms and measures 196.4 x 120.1 x 10.4 mm in overall dimensions. Enumerating it’s Storage specifications, this device is equipped with 1GB of RAM, 8 GB of Internal memory which can be easily expandable up to 32 GB via mcroSD card slot.

“Innovation is key to success in the mobility segment and that’s our biggest strength. The ASUS Fonepad is a great example of bringing to the market what consumers want; an innovative product that addresses the emerging market, with a large screen size in a mobile device that runs fast with responsive applications,” said Debjani Ghosh, Managing Director- Sales and Marketing Group, Intel South Asia. “This is just the beginning. We will significantly increase the urgency to introduce a range of innovative and differentiated offerings that will shape the future of this segment.”

Briefing it’s Photography Specifications, Asus Fonepad offered with both the cameras a primary camera at the backside of this device is installed at 3.15 MEGAPIXEL and a secondary camera installed at 1.2 MEGAPIXEL for video calling. In terms of it’s Connectivity support, Asus Fonepad has voice calling support via SIM card, it has inbuilt support for 3G technology and comes with Bluetooth v3.0. Other connectivity features includes Wi-Fi 802.11 b, g, n, USB 2.0 ports, 3.5mm headphone jack. To better complement the overall tech support unit this device polished on the body with two nice and standard colors Titanium Gray, Champagne Gold which are added as a last rush flavour in it’s styling.

In terms of Power Capacity, Asus Fonepad is equipped with a huge 4270 mAh of battery with 9 hours of running time cliamed by the company. The Price of Asus Fonepad is Rs 15,999 and with such an affordable price tag it will definitely give a tough fight against the other competitors in the same category like Samsung galaxy Tab 2 and many more.

Mr. Peter Chang, Regional Director-South Asia and Country Manager, System Business Group, Asus India said “Users now want a better screen with entertainment, social media and other online activities and this is playing an increasingly important part in our mobile lifestyles by incorporating 3G mobile data connectivity with full telephony support, we have made the ASUS Fonepad the perfect combination of a tablet and phone in one single device at an affordable price”.

For more technology updates, Stay tuned with us.