“Learning from you” concept of the electronics manufacturer LG has resulted into a new series of premium smartphones, taking new direction in the smartphone design by launching its first smartphone introduced under LG’s new “G” series for premium devices as LG G2. The phone was today launched at New York in the presence of the company CEO, it is company’s new flagship handset providing premium features and specifications. 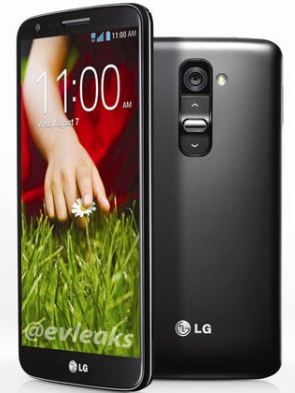 LG G2 phone with no side buttons and highly featured

The new LG G2 is launched with host of innovative features, in terms of display, it comprises of 5.2-inch Full HD display which is the largest display in today’s 2.7-inch wide smartphone category. Loaded with 3,000mAh battery, the LG G2 Is having Graphic RAM (GRAM) technology which reduces the energy use by 26 percent. It offers 13MP camera with Optical Image Stabilizer (OIS) technology which can capture the pictures in motion also without blurring them. It features a 24 bit/192kHz Hi-Fi playback that reproduces studio-like quality sound. The LG G2 runs on the industry’s most advanced mobile chipset, the Qualcomm Snapdragon 800 Processor running at 2.3 Ghz with total 4 core.

The more drastic change is done with the side buttons keeping in mind the increasing size of smartphones. Instead of being on the sides of phone they are placed at the rear of the device, making this the first smartphone to be completely devoid of side buttons. This makes increase and decrease of volume an easier task while talking. Long-pressing on the rear-mounted volume keys allows users to launch Quick Memo and the camera, making photo capturing even easier than before. And if the LG G2 is lying on a surface face up, there’s no need to lift the phone to access the power button on the back. LG G2 can be powered on simply by tapping twice on the display.

One of the another interesting feature of this phone is its Infrared port that can be used to remotely control home entertainment devices by learning from their conventional remotes.

Overall the phone is fully loaded with new features and technologies and ready to give a hard competition to the present featured phones. But what would be its demand and sale would be a drama to watch. So, for more updates stay in touch with us.