Olo has been news for a while, not only being a creative innovation, it also possess capability to transform how we see 3D printing. For those who doesn’t know about it, its a compact 3D printer which works in conjunction with your phone and using its screen light to print 3D object. The actual product is not yet launched but it is promised to be available at USD 99 making it world’s cheapest 3D printer. The creator of OLo pledged for $80,000 goal however, they have already managed to raised twice of the pledged amount and still 20 days remains to go. 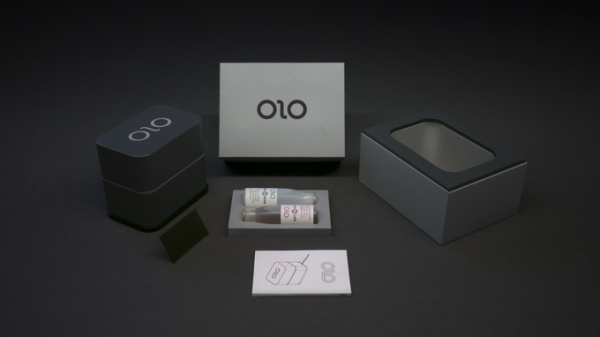 Olo – turn your phone in to 3D printer.

Olo uses a very simple technology yet very brilliant idea, all you need is your smartphone, Olo and Olo app to start printing object of your choice. To print, select your 3D object, pour in special resin which will be provided by the company, now wait for couple of hours and you will have your 3D object printed for you. The Olo supports 400cm3 printing volume. Its albeit small but considering its affordability and practical use, thats not big issue. Ofcourse if you need something bigger then opt for bigger convectional 3d printer.

While reading this , you must have lots of question about the Olo, its design and its operational methods. The Olo 3d Inc. (company behind Olo) has created a very professional video to showcase working of Olo in a very practical way. Check out the video below, it should answer most of your question as picture speaks thousands of words while a video, millions.

The device lets you print object scanned through its app, you can also print objects from regular 3D, cad programs as well as you can download and use 3D objects available online. The best part as said is your phone, it can use phone upto screen size of 5.5 inches and they have app made for almost all major platform including Android, iOS, Windows.

When you pour liquid resin into it, there is glass separator so it never gets in touch with screen of smartphone. The liquid resin comes in variety of format, they have one to make hard object, other for making flexible. As per company, liquid resin bottles will be priced competitively in order to keep printing affordable.

How internal of Olo works.

But quality of printing depends upon type of screen resolution and brightness, though they have not mentioned but AMOLED based smartphone should give best possible quality while others may suffer due to light bleeding etc. On the downside, it takes many hours to print an object, for example, to print and 1 cm object, it takes around 46 minutes, it means you may have to leave your phone for hours in order to get a decent sized object.

There are already many thousands of backers / supporter of this yet to be released device however, to see how much practical it is, we will have to wait for deliveries and real life feedback its users.