A new element has been introduced in the range of cheap large screen smartphones by the domestic manufacturer Karbonn mobiles. The name of this new entrant introduced is dubbed as, “Karbonn A11+” and it is now up for grabs from online retailer Saholic with a price tag of Rs 5,849 only. Apart from saholic, it will be soon available on all the leading authorized dealers in the country. 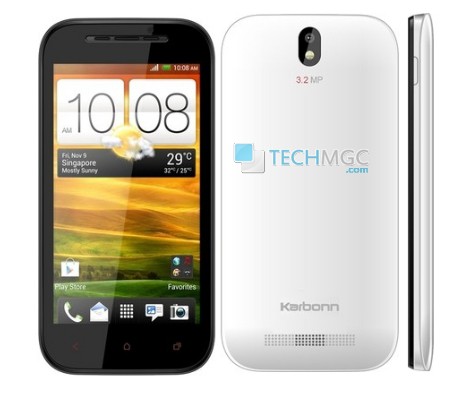 The starring feature of this device is it’s display, it comes with a huge 4.7 inch of capacitive touch screen display with 854 x 480 pixels resolution yet at budget price range. Dealing with it’s platform dependency, this device sails on Android 4.0 Ice cream sandwich operating system which is bit outdated now. It is powered by a single core processor running at a clock speed of 1GHz though a dual core was expected. It supports Dual Sim with dual standby technology which help the user to remain active on two Sim’s in a single handset. In terms of storage specifications, this device is equipped with 512MB of RAM which is good considering its price tag. Internal memory is of 512MB under which 161MB is available for user usage, it comes with a micro SD card slot to expand the memory up to 32GB.

Camera-wise, this device supports both the front and back snapper options. On to it’s back panel, the back or primary camera is rated at 3.2 MEGAPIXEL associated with LED flash to capture nice quality snapshots in dim light. On the front side, it has been installed with 0.3 MEGAPIXEL of front facing camera which enable the user to perform video chatting. Connectivity wise this device includes 2G, WiFi, Bluetooth, FM radio and a 3.5 mm audio jack. It does not support 3G. To supply this device a proper meal of nutrient to remain charged up throughout the day, this device holds 1450mAh of battery which claims to deliver a decent amount of talktime as well as stand by time.

Brief summary of Karbonn A11+

To make the offer more exciting, Karbonn is offering this device with a free flip cover.