Despite the huge number of cheap phablets already available in the Indian market, the phenomena of new launches in segment haven’t slowed down a bit. Day by day one or the other smartphones vendors comes out with their low cost or budget phablets. And continuing the trend a domestic manufacturer familiar to us as, “iBall” has added a new entrant to upgrade it’s phablet portfolio in the Indian market. The name of this new entrant is dubbed as, “iBall Andi 5h Quadro” packed with some nice features and specifications. 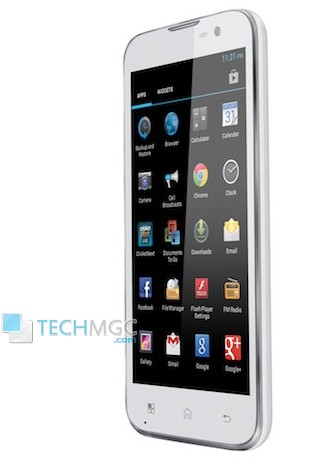 iBall Andi 5h Quadro has been designed and launched keeping budget customer in mind who are looking for powerful device in this segment without shelling out lots of money, and for this company has placed a reasonable price tag to own this device which makes it quite affordable considering its features, it cost Rs 11,999 only. Coming towards its specifications and technical details, the new iBall Andi 5h Quadro measures 9.9mm of thickness which makes it an ultra-sleek smartphone to give beautiful looks and comfortable hold.

In terms of frame up, iBall Andi 5h Quadro sports a most desired 5 inch of qHD, capacitive touch screen display with 960×540 of pixels resolution. The colossal screen blender the display with ~220 ppi of pixel density which offering a nice and crisp display. It supports Dual Sim(GSM+GSM) with dual standby technology which allows the user to use multiple Sim’s on a single handset. Dealing with it’s platform dependency, this device sails on Android 4.2 jelly bean operating system which give the user to experience all the latest options and flexibilities which Google has embedded for this version. This device is powered by a quad core processor running at a clock speed of 1.2 GHz giving a decent computing experience on phone.

Commenting on the launch of iBall Andi 5h Quadro, Sandeep Parasrampuria, Director, iBall, said, “iBall Andi 5h Quadro with quad-core processor, superb screen and camera is designed keeping in mind the needs of smartphone lovers who need all – the speed, the power and big screen. Andi 5h shall suit the needs of all entertainment lovers and its ultra-slim design and superb features allow one to carry its experience everywhere and get addicted to it.”

In terms of storage specifications, this device is equipped with 1GB of RAM which makes the switching between multiple applications quicker and smoother. And to store all your downloaded files, data and other relevant official or unofficial documents this device comes with 4GB of internal memory which can be expanded up to 32GB via micro SD card slot. It comes with both the primary and secondary camera supports, on the back side 12MEGAPIXEL rated primary camera allows the user to capture impressive snapshots which include basic tiny details to vast landscapes. Secondary camera is rated at 2 MEGAPIXEL which will allows an uninterrupted video calling on 3G and over WIFI.

Connectivity wise this device includes 3G, 2G, WiFi, bluetooth, GPS, and aGPS support. Adding delight, Andi 5h Quadro supports 3G HSPA+ which gives you unbelievable upto 42 mbps download and 11 mbps upload speed. To supply the proper need of power supplement for this device, it comes with a decent 2200 mAh battery to give you long hours for work and play.

Though there are many competitors available in the market already for this device, will it be able to give a tough fight against them.

Share your views, for more details on latest technology, stay tuned with us.