Chinese manufacturer, Lenovo mobiles has unveiled a bouquet full of Smartphones ranging from low to high cost price tag. All these Smartphones will make their way to the Indian stores in the upcoming weeks of this month. A total of 5 smartphones will make their entry in which lenovo A 706 and A390 will fall under A series whereas Lenovo S 820 and S 920 will shine in S series. Along with A and S series company has also dipped a single spice of smartphone in P Series which will be called as Lenovo P780. 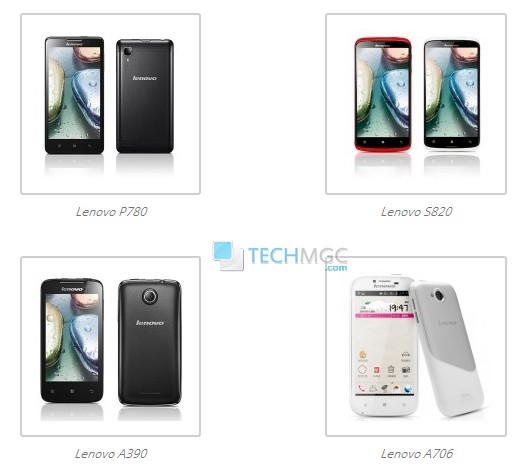 Lenovo is quite a popular brand in the Desktop PC and laptops worldwide but now company is also aiming to upgrade its smartphone portfolio in the Indian market. Coming towards the specifications and details of the first one in the line up, Lenovo S 920 will sport a huge 5.3 inch 720p of capacitive touchscreen display. There are not much details given by company yet however, a complete bunch of official specifications is yet to be disclosed. Dealing with the Platform dependency of Lenovo S 920 will sail on Android 4.2 Jelly Bean Operating system powered with a Quad Core MediaTek processor running at a clock speed of 1.2 GHZ. Dual Sim with Dual Standby technology which is kept as a standard feature by most of the domestic and chinese manufacturers in their smartphones, this device is also equipped with it (WCDMA + GSM).

Briefing it’s Storage specifications, this device support 1GB of RAM. Enumerating it’s Photography specifications, this device includes an 8 MEGAPIXEL of primary camera. The price of Lenovo S 920 is expected to be Rs 26,399. Information regarding it’s connectivity specifications remains undisclosed, though we can assume that at such a price tag it will support 3G, 2G, WiFi, Bluetooth and many more. Second in the line up is Lenovo P780 which will is few inches smaller in screen size as compare to Lenovo S 920 and flaunts 5 inch 720p of HD display. It will sail on the same platform of Android which as Lenovo S920 and run on Android 4.2 Jelly Bean Operating system powered with a quad core MediaTeck Processor at a clock speed of 1.2 GHz. It is also expected to be powered with 8 MEGAPIXEL of primary camera and to give life to this device company has encumbered this it with 4,000mAh of battery. The Price of lenovo P780 is Rs 22,529 as with most of the smartphones today, it is also equipped with dual sim support.

“The journey for Lenovo smartphones in India that began last November, takes a whole new dimension with the launch of 6 new power-packed mobile devices, which offer an excellent choice for smartphone buyers in India. Our retail footprint has grown considerably to 3000 retail stores, since we launched our first range of smartphones last year. We will continue to expand our reach in India,” said Amar Babu, Managing Director, Lenovo India.

Coming to next device announced, Lenovo S 820, the phone will sport 4.7-inch 720p display and it will be equipped with 1GB of RAM, powered with Quad-core MediaTek processor at a clock speed of 1.2 GHz, dual-SIM support and sails on Android 4.2 Jelly Bean Operating system. The Price of Lenovo S 820 is Rs 19,599.

Last but not the least is, “Lenovo A 390” which is the cheapest of the bunch. In terms of display, this device will flaunt 4 inch WVGA Capactive Touchscreen display. It has been priced at just INR 8,689. Dual core MediaTeck processor at a clock speed of 1GHz, 5MP rear camera, 512MB RAM, 1400 mAh battery and runs on Android 4.0 Ice cream sandwich Operating system. It also comes with dual-SIM support.