One of the leading company serving in electronics industry worlwide, “Videocon” has launched it’s another gizmo in the low cost entry level range of Android tablets equipped with voice calling feature called as, “Videocon VT75C” tablet in the gadget hub of India. 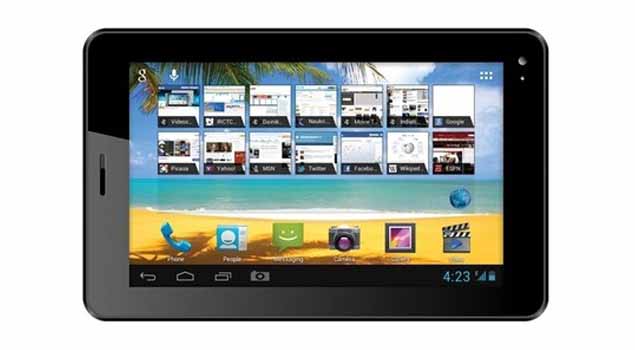 Just a few months ago, Videocon VT10 was launched under the average budgeted segment to mark it’s virtue as a strong competitor in Rs. 10000 segment, and now with the launch of Videcon VT75 C it’s looks like company has employed a new strategy to rule in the low cost entry level tablet segment which incorporates some of the biggest leader like Micromax, Lava, and Datawind. Recently, Datawind launched it’s Ubislate 7C+ which is packed up with similar specifications as compare to Videocon VT75C but however Videocon share some plus point from Datawind which would be discuss below. Eying on to the Specifications of Videocon VT75C display, it features 7-inch LCD capacitive multi-touch screen with automatic orientation detection sensors display. It supports 800×480 pixels resolutions thus producing ~133.28 pixel density. Dealing with it’s Platform dependency, Videocon VT75C tablet sails on Android 4.1 Jelly Bean Operating System powered with a Single Core Processor clocked at 1 GHz.

In terms of Image Optics, Videocon VT75C support a primary camera rated at 2.0 MEGAPIXEL and a VGA front facing camera rated at 0.3 MEGAPIXEL. Some of the other inbuild applications include Facebook, Skype, Saavn, Diamond Twister 2, and Movie studio among others.

To make the life going on for this device, it has been equipped with 3,000 mAH of battery with 4-5 hours of talktime approximately. The Price tag of Videocon VT75C tablet is Rs 5,965 and with such a price tag it will give good competition to the newly launched Datawind Ubislate 7C+ and also already available Micromax talk.