Byond Technologies, domestic firm counted amongst the active gadgets manufacturer in the country has popped up their new element in their premium segment of phablets by introducing the all new Byond Phablet PII in the local market. 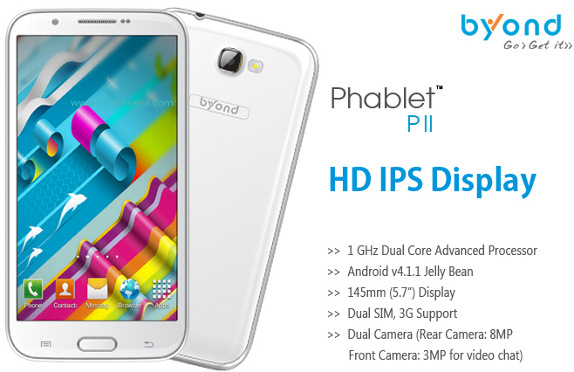 Byond Phablet PII is slotted below Byond Phablet PIII which is already available in the market. Under the hood , this device sports a huge 5.7-inch multi-touch HD IPS capacitive Touchscreen display with dynamic resolution power of 1280×720 pixels. Dealing with the device power specifications, Byond Phablet PII runs on Android 4.1.1 Jelly Bean Operating System powered with a dual core processor clocked at 1 GHz, it is also dubbed with 1 GB of RAM. Following up the legacy adopted by most of the domestic entrepreneurs serving in mobile and gadgets arena in the country this device is bagged up with Dual Sim ( GSM + GSM) technology. In terms of Storage specifications, Byond Phablet PII equipped with 4GB of internal storage which can be easily expandable up to 32 GB via micro SD card slot.

Dealing with the Image Optics, Byond Phablet PII support 8 MEGAPIXEL of rear camera and a front facing camera as well. Enumerating it’s Connectivity measures, it support Wi-Fi, 3G, Bluetooth amongst an array of other sensors and social media apps like Facebook, Twitter, LinkedIn and Skype. To power it up, this device equipped with 2500 mAh of battery which the company claims to deliver 100 hours of standby time.

The Price of Byond Phablet PII is Rs 14,999 and is available in the market. Well all around the Phablet houses some nice specifications but it will be interesting to see how techfolks will respond towards this device. Since, QuadCore powered devices are on their way to be rolled out in the market.Though powered with latest Android version and equipped with a dual core processor for such price tag would surely give a tough call for other companions already available in the market.