The Company which is in the news for it’s back to back launches in the gadget industry and who always try to cook something special by adding a mixture of their hard work with innovation in the company’s laboratory. No need to get introduced specially non other than Samsung mobiles has made a latest announcement of a new element at an official event in London. Samsung unwrapped the suspense and declared to add a new element under it’s one of the most prodigious range of hybrid laptops, tablets series called as ATIV worldwide.

Samsung is a well-known, reputed and listed among the top position of consumer goods and electronics seller in the industry, company is famous for launching every type of devices claimed with best hardware and software capabilities. And to continue more further, company has just announced a new element named as Ativ Q in the laptop series. Coming towards the specifications and details of ATIV Q , this device is a dual booting device that runs on both Windows 8 Operating system and Android 4.2.2 Jelly Bean Operating system. Just at a single tap of an icon it’ll boot into Android Jelly Bean, letting you swipe around all of your favorite apps from the Google Play store. In terms of display, it features an insane 13-inch display which has incredible qHD+ resolution of 3200×1800 pixels offering 275 pixels per inch. Samsung claims that the display is ideal for viewing outdoors under direct sunlight.

As we mentioned above it is convertible, a user can easily lift the display up at the back and it reveals a keyboard underneath. The screen folds up and locks into place behind the keys, allowing you to type and swipe in much the same way you would on any other touch-screen laptop. However, this convertible package is not a new feature it is the same converting technique we saw on Sony’s Vaio Duo, but Samsung has taken a single step further. Rather than converting just between laptop and slate, the screen can be easily flat, lifted above and parallel to the keyboard. One of the most impressive parts and the starring feature of the hardware, is has insanely high 3200 x 1800 of pixel resolution.

Under the hood, the Ativ Q is powered by an Intel Core i5 Haswell processor. Some of the company officials says that it will get up to 9 hours of battery life, which would be quite the achievement for such a high-resolution device. The main selling point is the dual-booting, and particularly the SideSync software that lets you share data between the two operating systems, and even pin Android apps to your Start screen. To make the overall surfing more easier and fun, it comes with an S-Pen and users will have the ability to pin Android apps on the Windows 8 home screen. 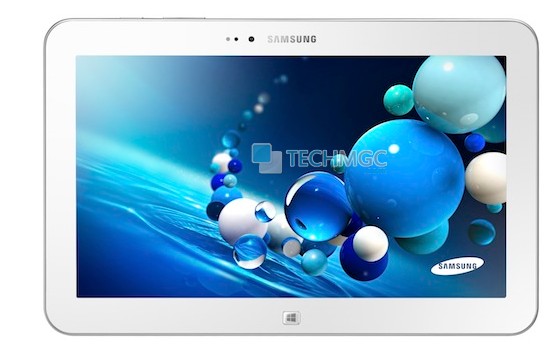 Samsung also announced the Ativ Tab 3, a super-thin 10.1-inch tablet running Windows 8. From the outlooks, it looks a lot like the Galaxy Tab 3, a fact Samsung acknowledged during its press conference, but it’s very much a full Windows device — “not the RT version,” our emcee said with considerable disdain for Microsoft’s low-powered OS. It’s remarkably small for a full Windows device — it’s 8.2mm thick, and weighs only 1.2 pounds. The Tab 3 comes with Office built in, and there’s an S Pen here as well. Unfortunately it only has a 1366 x 768 screen, but Samsung promises up to eight hours of battery life.