After unveiling it’s first OLED TV at CES 2013, LG Electronics has launch it’s first (infact world’s first) Curved OLED TV in South Korea as LG 55EA9800. LG will starts dispatching the deliveries of their new OLED TV in the upcoming months as per the statement expressed by the company officials. 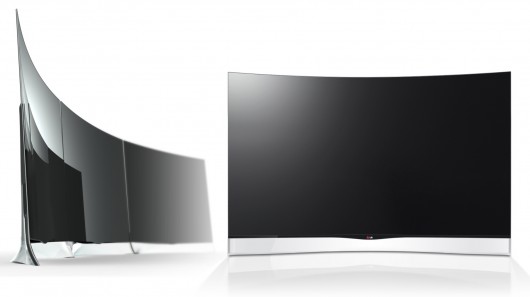 At the CES 2013, both the LG and Samsung were rolling out their leading innovation in front of the whole world. Samsung first unveiled it’s much awaited Smartphone under it’s prodigious Galaxy series Samsung galaxy s4 and now LG after unveiling LG Optimus GK company unveiled the launch of it’s fist curved OLED TV. Shifting the shaft towards it’s specifications, LG 55EA9800 is 4.3 millimeters (0.17 inches) thinner and weighs nearly 17 kilograms (37.48 pounds) which makes this device body highly leaner and sharper. This new element by LG Electronics will flaunts industry’s very first curved screen ergonomic design, providing an “IMAX-like” viewing experience in the home which is very interesting as it allow you to view the image 35% more than the original imaging.

From the Sources, we came to know than it took almost more than five years of research behind developing the optimum curvature. The screen surface is equidistant from the viewer’s eyes, eliminating the problem of screen-edge visual distortion and loss of detail.

LG Vice President of Home Entertainment Thomas Lee got more specific later in the same report, saying that “curved TVs are coming in the second half of this year.” No specific details on the sets were given beyond that statement, but multiple news stories soon followed and said that LG’s curved OLED TV was indeed coming by the end of the year throughout the world.

When asked about the possibility of multiple curved OLED TVs hitting the market in the future, the spokesperson similarly said that “there’s nothing definite” on that front either – though he did not deny the statements made by Lee or Shin in the original report.

This device will features LG’s WRGB and Color Refiner technologies, which makes it filled with great, vibrant natural images. Also, the unique Four-Color Pixel system features a white sub-pixel, which works in conjunction with the conventional red, blue, green setup to create the perfect color output. LG’s exclusive Color Refiner delivers even greater tonal enhancement, resulting in images that are more vibrant and natural than anything seen before.

It will be interesting to see when LG will finally makes it’s first OLED TV launch in rest of the world. For more information Stay tuned with us.