One of the leading mobile phone manufacturer and supplier across the globe known for it’s reliable and efficient products familiar to us as Nokia Corporation has added two new elements in the smartphone industry. The name of these handsets are Nokia 307 and Nokia 208 packed with some exciting features at an affordable price range. 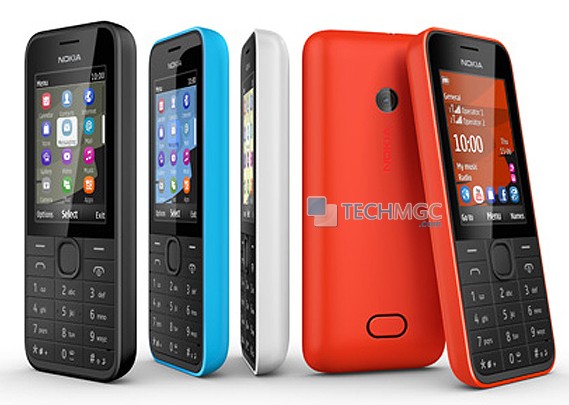 As per the announcement, Nokia has introduced two of its cheapest 3G-enabled phones called the Nokia 207 and Nokia 208 . Giving them a quick glance, both the phones Nokia 207 and Nokia 208 seems like feature phones with candy bar design. Through it’s design it is clear that both the phones are almost identical in nature except couple of inner features. The price of both the devices are announced at $68 and converting it into Indian Ruppes it would sell around 4,000 rupees only. Nokia says, that they will start selling the devices in Q3 this year.

Coming towards the technical specifications and details of both the phones, Nokia 207 and Nokia 208 are almost the same in terms of measurement and overall body weight. Both the phones weighs 91.0 gms and measures 114.2×50.9×12.8mm in size. In terms of display, these phones features 2.4 inch QVGA display with 320×240 of pixels resolution which makes the display more sharper and crispier by providing 166ppi of pixel density. It also equipped with a stylish alphanumeric keypad. Coming towards the software, both the devices run on Nokia’s Series 40 operating system. Some of the pre-loaded applications like FM Radio, Email and Nokia Express Browser. Additionally, you can also download social apps like Facebook, Twitter and WhatsApp and productivity apps like Transfer app, which allows users to sync contacts directly from their smartphone from the Nokia Store.

“The Nokia 207 and Nokia 208 are designed for people who like a classic phone and traditional keypad but don’t want to miss out on smartphone experiences, like staying connected to social media and accessing the Internet,” said Nokia’s Timo Toikkanen. “As our most affordable 3G devices yet, the Nokia 207 and Nokia 208 offer a perfect balance of performance, features and quality.”

In terms of storage specifications, this device is equipped with 64 MB of RAM, 256MB of internal memory which can be expanded up to 32GB with the help of micro SD card slot. Internal memory is low which could be the drawback for these mobile phones but since company has manufactured both the devices with a micro SD card support it will not be such a big issue. Briefing it’s photography specifications, Nokia 207 has no camera options while Nokia 208 include a primary camera rated at 1.3 MEGAPIXEL with smart features like like voice-guided self-portrait, sequential shot and panorama mode. Nokia 208 also comes in single and dual sim variant.

On the connectivity front, the devices support speeds up to 3.5G and feature a micro-SIM card slot, 3.5mm audio port, micro-USB port and Bluetooth 3.0. Nokia has also added an Internet sharing feature that allows users to use the phones as a modem and by connecting to a laptop via a USB cable, one can use the phone’s Internet to surf the net.

To make the life going on for these handset, they are manufactured with 1,020 mAh of battery which claims to deliver 4.5 hours of talktime on 3G and 500 hours of standby time on 3G.