Intex Technologies, domestic manufacturer serving in electronics industry best known for it’s hardware equipments, affordable mobile phones has launched it’s first entrant which is a gaming-centric feature phone named as, ” Intex Player” in the Indian market. After introducing a bunch of Android based mobile phones over the past few months, company has finally stepped up with a new strategy targeting those who loves to play games on their mobile phones. 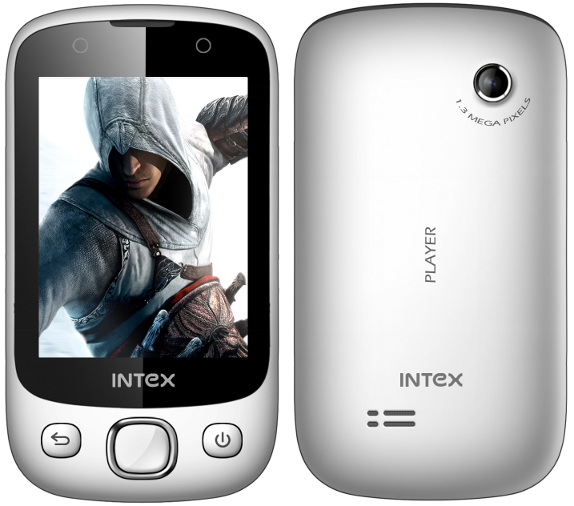 In the era of huge screen, highly powered Smartphones which are dubbed with latest innovation and are available at an affordable price tag, it’s quite weird to see company introduces such a basic gaming phone at a price tag of Rs 2,790 with 1000 pre-installed games while keeping other specifications too basic. In terms of Frame-up, Intex Player features 2.8-inch TFT touch screen display with 2 dedicated gaming buttons on the top to play over 1000 pre-loaded games, this might be the drawback of this phone due to it’s small screen size display. It support Dual SIM ( GSM + GSM ) with Dual Standby technology. However, information regarding the operating system, processor, RAM supported for this mobile handset remains undisclosed.

Commenting on the launch, Sanjay Kumar Kalirona, GM-Mobile Business, Intex Technologies (I) Ltd. said, “The consumption pattern of mobile phones has drastically changed in the last five years in India. Not only are young professionals using mobile phones for work but are also indulging themselves at leisure time by making use of entertainment features. Thus, it became a critical need to create a phone that would offer our customers the choice to engage in fun activities such as games etc.

Briefing it’s Image Optics, this device offered with a primary camera rated at 1.3 MEGAPIXEL with video recording. To make the life going on for this mobile handset, Intex Player equipped with 1200 mAh of battery with up to 4 hours of taltime and 200 hours of standby time. Some of the other features include auto call record, battery manager, support for Hindi and English languages, and smart dial.