Today is quite a busy day for one of the biggest tech giant in electronics industry as Samsung has officially launched it’s most auspicious device named, “Samsung galaxy S4” which is in the from quite while regarding it’s amazing features and specifications while at the same time Russian site Hi-tech.mail.ru has just disclosed the first press render of Samsung upcoming device named, “Samsung Galaxy Core”. 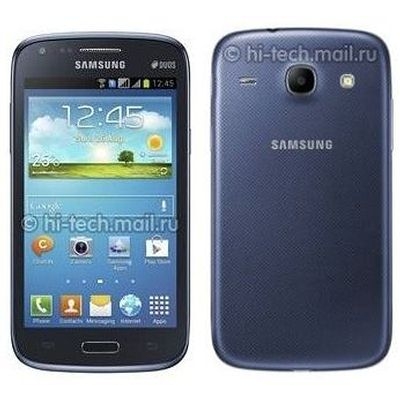 We all know that Samsung is quite busy in promoting Samsung galaxy s4 worldwide but that doesn’t means company is not building some other devices in the mid range segment. It is rumored that Samsung Galaxy Core will be officially announced very soon by the company itself. From the Sources, we came to know that in terms of technical speficifcations, it will features a descent 4.3-inch WVGA capacitive touchscreen display that supports 480 x 800 pixels resolution. As per the rumors, this device will run on Android 4.1 Jelly Bean operating System with Samsung’s TouchWiz running on top of it out of the box and get powered up with a Dual Core processor clocked at 1.2GHz. In terms of Storage specifications, it will be equipped with 768 MB RAM, 8GB of internal memory which can be easily expandable as this device will be dubbed wit a micro SD card slot.

As far it’s Photography specifications is concerned, Samsung Galaxy Core will be equipped with a primary camera rated at 5 MEGAPIXEL approximately. Dealing with it’s specifications, it will be thinner and lighter in weight and spreads nearly 129.3 х 67.56 х 8.95 and weighs 140 grams approximately. Speculating it’s connectivity support, it will support WiFi, Bluetooth, GPS and 3G or 2G depends basically depends on their respective price tag.

As it is a mid range segment phone, it will get powered with 1800mAh of battery. It can be expected to come with Dual Sim and Dual Standby connectivity. However, for complete the specifications wait until it’s launched.