Counted among the list of premium smartphone brand Blackberry mobiles is in news shores once again. A new entrant named as Blackberry A10 has been leaked online with complete details and specifications. As per the rumors, the codenamed of Blackberry A10 will be dubbed as Aristo. It is a bouquet full of latest trending specifications and features. 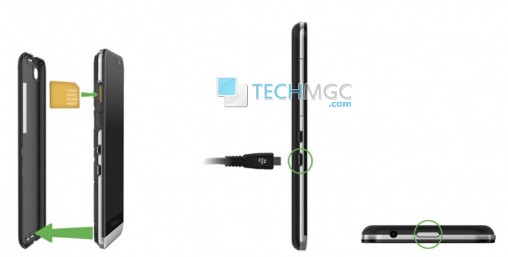 This smartphone will now join the line up of large screen sized smartphone offered by the range of premium smartphone manufacturers in the gadget industry. Few month ago, company had introduced Blackberry Z10 which was the company’s first big screen smartphone which gained success and popularity overseas (though not very much) and now to continue this winning legacy further company is in plan to introduce Blackberry A10 . Although, details are not confirmed, we can consider it more as a rumour than actual verified news (just to be on safe sid). Blackberry A10 will be the second element launched by the company till date in the arena of large screen smartphones by RIM. Coming towards it’s technical details and specifications so far leaked online, in terms of frame up this device will sport a huge 5 inch of OLED HD WXGA capacitive touch screen display with 1280×720 of pixel resolution.

In terms of software specifications, this device will run on blackberry 10.2 operating system. Processor support is still a mystery but could be powered with dual core processor (Dual Core 1.7GHz Qualcomm Inc. (QCOM) MSM8960 Pro, Quad Core GPU (Snapdragon S4)). Enumerating it’s photography specifications, this device is expected with both the primary and secondary snapper options. On the back, it will have 8 MEGAPIXEL of primary camera and on the front side a 2 MEGAPIXEL of secondary camera. Briefing its storage specifications, this device will be offered with 2GB of RAM which makes the speed of performing several tasks more faster and quicker. Internal memory could be 16 GB whereas the expansion of the memory can be done via micro SD card slot up to 64 GB.

Connectivity wise, we assumed it to be enriched almost all the latest connectivity measures. It will support 4G, 3G, 2G, WiFi, Bluetooth, NFC, micro USB, micro HDMI out, ambient Light, proximity, accelerometer, gyroscope, magnetometer, altimeter and many more. To power it up, it will comes with 2800mAh of integrated battery.

Blackberry A10 specifications and features

With all these specifications and features and a brand name of Blackberry how much should be the price of this device. Share your view with us.