Domestic manufacturer, Lava Mobiles has launched a new and cheapest element in the entry level range of Smartphones with 4″ display. Lava has introduced this new element under the shadow of it’s popular smartphone series familiar as Iris globally. This new product is named as Lava iris 401e and it is available for sale on Flipkart.com at a price of Rs 4,249 only. 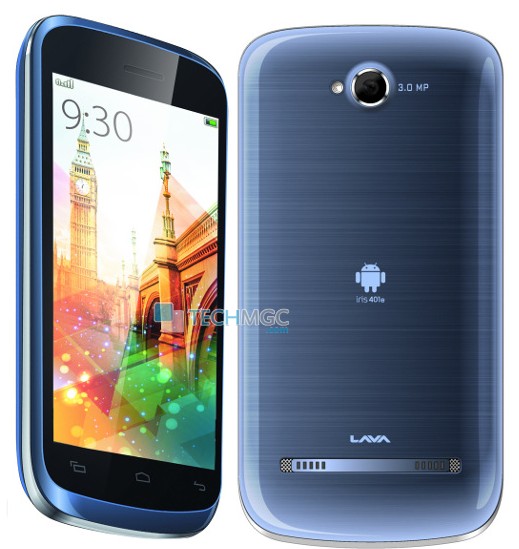 Just a few weeks ago, Lava had introduced a smartphone in it’s Iris series which was equipped with Quad Core processor and named as Lava Iris 458Q which is cheapest quad core power smartphone available in the country till date and now with Lava Iris 401e company has also marked it’s virtue in the cheapest entry level range of Smartphones offered with 4 inch of screen size. Coming towards the specifications and details of lava iris 401e, in terms of frame up this device flaunts a decent 4 inch of Capacitive Touch screen display with 480 x 800 of pixels resolution which will blender the display with 42.41 ppi of pixel density. Lava Iris 401e smartphone has dimensions of 124 x 60 x 10 mm. This means that smartphone features slim and smooth body with 4.5 mm thick. The weight of Lava Iris 401e is 254 g. This shows that the smartphone is not quite heavy to handle.

From the Software front, Lava iris 401e sails on Android outdated v2.3 Gingerbread Operating system. This could turn out to be a minus point for this device as most of the other manufacturers devices available in the market are offered with ICS OS at the same price. From the hardware front, Lava Iris 401 e is powered with a Single Core processor at a clock speed of 1Ghz. Dual Sim with Dual Standby technology incorporated by most of the other smartphone manufacturers in their devices, this device also support Dual Sim (GSM+GSM) with Dual Standby technology.

In terms of Storage specification, this device is equipped with 256MB of RAM, 200MB of Internal memory so you can store only limited number of songs and videos on phone’s memory. Its small storage capacity is quite disappointing. Though, the smartphone has less inbuilt storage capacity but it has a microSD card slot. Thus, memory can be extended up to 32 GB by using a microSD card. Enumerating it’s Connectivity specifications, this device support 2G, GPRS with EDGE Connectivity, WiFi, Bluetooth, FM Radio, Sound Recorder and a 3.5mm Audio Jack. Enumerating it’s Photography specifications, this device comes with only primary snapper options. On it’s back, it includes a primary camera rated at 3 MEGAPIXEL with LED flash technology.

To make the life going on for this device, Lava Iris 401e features a powerful Li-Ion 1500 mAH battery. The talk time of the smartphone is up to 6 hours while the standby time is up to 250 hours. The smartphone can continuously play music and videos for 10 hours easily.

With advent domestic manufacturers like Lava, Micromax , iBall etc, we have now various option to choose a smartphone and that too with a very competitive price range, let us see how far this phenomenon can lead us. May be a 4″ inch smartphone for Rs. 1000 in coming future ?